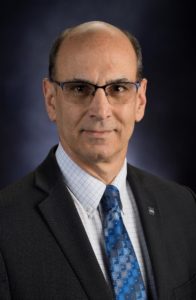 George Finelli serves as Deputy Director for Intelligent Flight Systems, Research Directorate at NASA Langley Research Center.  He previously served as Deputy for Strategic Operations, Mr. Finelli led the Revitalization Office within the Center Operations Directorate.  While there, he led the implementation of the ViTAL (Vibrant Transformation to Advance Langley) 2.0 Plan, which included overseeing the formulation and implementation of various construction and demolition projects, as well as addressing facility utilization considerations.  He also led the formulation of a 5-year plan for Smart Infrastructure under the Center-wide Transformation/Smart Center efforts.

As Director of the National Aeronautics and Space Administration (NASA) Langley Research Center (LaRC) Aeronautics Research Directorate (ARD) from June 2012 to the August 2019, Mr. Finelli led the planning and implementation of approximately $190M per year of research and development within the NASA Aeronautics Research Mission Directorate (ARMD), which funded the research of over 500 LaRC civil servants.  Under Mr. Finelli’s leadership, LaRC contributed technologies to ARMD Programs (including the Environmentally Responsible Aviation (ERA) Project, the Unmanned Aerial Systems (UAS) Integration into the National Airspace System (NAS) Project, and the Vehicle Systems Safety Project), other government agencies, and U.S. industry that improve the safety, performance, environmental impact of aircraft and that expand the Nation’s air transportation system capacity.

As Director of the Center Operations Directorate at NASA LaRC from December 2005 to June 2012, Mr. Finelli provided vision and leadership to a workforce of approximately 500 civil servants and contractor personnel for the safe, efficient, and sustainable operation of LaRC’s major aerospace testing facilities, as well as engineering and maintenance services for all Center facilities with an annual budget of approximately $160M.  Under Mr. Finelli’s leadership, LaRC received the 2012 Governor’s Environmental Excellence Award from the Virginia Department of Environmental Quality for its “Sustainability through Planning and Innovation Program,” the 2011 GreenGov Presidential Lean, Clean, and Green Award, and two NASA Environment and Energy “Blue Marble” Awards for demonstrating exceptional environmental leadership in support of NASA’s missions and goals.

Mr. Finelli was appointed to the Senior Executive Service in April 2003 as the Program Director for the NASA Aviation Safety and Security Program (AvSSP) within ARMD.  The AvSSP was a major multiorganization, multidisciplinary program aimed at developing technology necessary for reducing the fatal aviation accident rate, with participation from Langley, Ames, Dryden, and Glenn Research Centers and an average annual budget of $150M.  In addition, he was responsible for integration and direction of the components of the Program, in cooperation with the Federal Aviation Administration (FAA), the Department of Defense, the Department of Homeland Security, and the American aviation industry.  He also served as the Senior NASA member on the Commercial Aviation Safety Team (CAST), a U.S. industry and government team whose goal was to reduce the fatal accident rate in the U.S. by 80%.  In 2008, CAST received the Collier Trophy for actual reductions in the U.S. fatal accident rate.  The award write-up cited significant NASA contributions to the National effort, all of which occurred under Mr. Finelli’s leadership.

Mr. Finelli’s honors include the Presidential Rank Awards for Meritorious Senior Executive in 2007 and 2015, the NASA Exceptional Service, and two NASA Outstanding Leadership Medals. In recognition from his peers outside of NASA, he was appointed to the Flight Safety Foundation International Advisory Committee and invited to serve on the FAA Center of Excellence for Airliner Cabin Environment Research Advisory Board. Mr. Finelli was awarded, as co-author, the H.J.E. Reid award in 1997, LaRC’s highest technical award.  He holds a Bachelor’s degree in Computer Science from the State University of New York at Buffalo, a Master of Science in Statistics from Virginia Polytechnic Institute and State University, and a Master of Public Administration from Troy State University.  Mr. Finelli completed the NASA Senior Executive Service Candidate Development Program and the Maxwell Mid-Career Fellowship Program.